Before entering into an agreement with an agent or distributor overseas, you need to do some research on the law in the territory where he or she is based. In some countries, for example, there are rules that require agency agreements to be registered with a Government department or that stipulate only nationals of the country can become an agent of a foreign supplier.

So, before signing anything, get some local legal advice early on to cover:

You might think that the issues mentioned above can be avoided if you say English law will govern the agreement with your agent. Unfortunately, it is not so simple and the local courts or even the legislation may take a different view.

Be sure to spell out all the key requirements in your agreement – territory, products, commission, initial period, targets, termination rights and much more. Don’t ever omit any important matters in the hope they will sort themselves out later.

Included in Exporting Made Easy – the book are some template agreements, which you can also order individually for download from ContractStore.com:

Thank you for producing a plain English and practical guide in 'Exporting Made Easy'. I'm currently in the start-up phase of my business as a Commercial Agent and have found your book really useful.
N. Tapping, Thirty Eight London

I attended Simon’s workshop for UKT&I on Agents & Distributors and his professional, friendly advice on exporting and finding the right agents and distributors was excellent. Inspired to purchase his book and in particular the legal bits which will save hundreds of pounds in custom-written contracts. We need only to adapt and then have a legal international lawyer check it over. Thank you Simon. Linda Adams, director, Repeat Software Ltd.

The Exporting Made Easy E-Book at £4.99 - download to your device straight away. 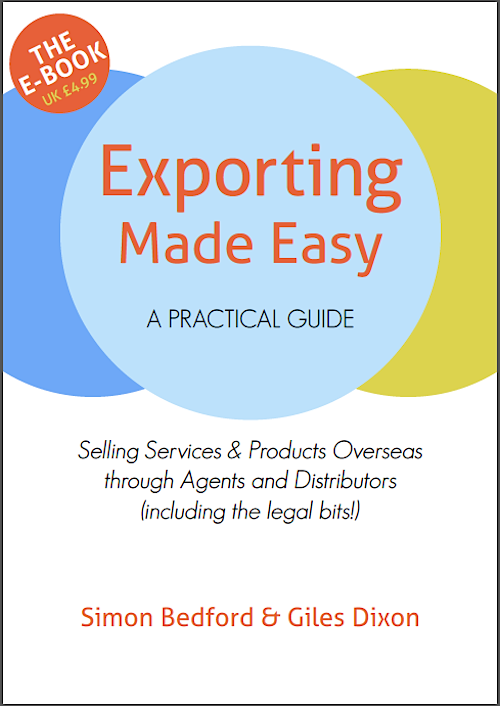